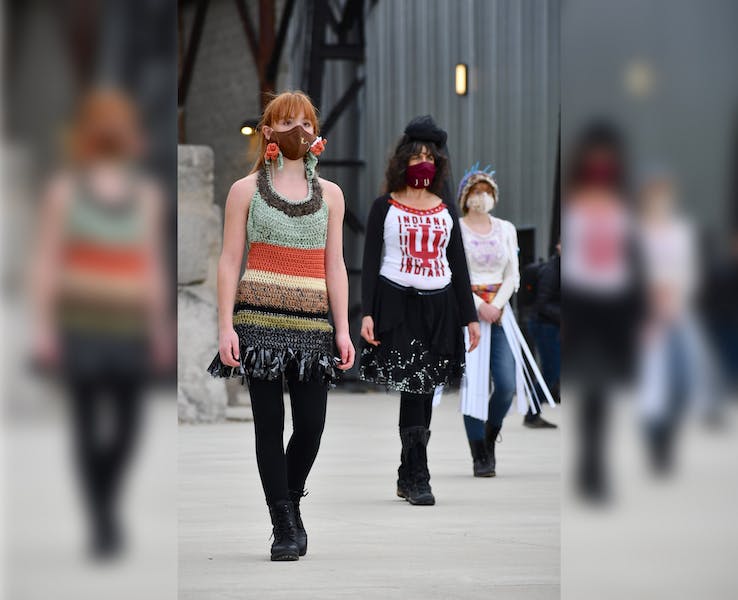 Since 2010, the Bloomington Trashion Committee has held annual parades featuring clothing made from recycled materials by local designers. But when her 2020 show was canceled due to the COVID-19 pandemic, the committee had to find a safer way for models to walk the runway.

The Bloomington Trashion Committee and Discardia is a completely voluntary organization for the Center for Sustainable Living project. Since 2010.

Designers make fashion out of recycled materials and submit it to the Trashion committee, made up of residents and residents of Bloomington. They encourage everyone to submit their own design and any model can walk their runway, regardless of body type, age and experience.

Since April 5, 2020, the show has been canceled due to the COVID-19 pandemic, the Trashion committee decided to make a video clip instead to keep moving forward.

The 10 minute video features 13 different fashion designs that were filmed at the Woolery Mill in Bloomington. It was choreographed and performed by Celina Jaffe with music by Janiece Jaffe. In the image above, there are three models with three different designs from different designers.

The first design is by retired researcher Betty Davis, who was inspired after visiting the Trashion Refashion show before moving to Bloomington in 2014.

Davis’ design is called “Last Pieces,” a crochet dress made from the last remaining pieces of yarn, plastic grocery bags and VHS tapes. It was tailor-made for the model with an open back, handmade button neck and VHS bangs for a shine to the hem, Davis said in an email.

The second design is from Sonya Lee, an arts educator who joined the Trashion committee because it gave her the opportunity to be creative even with her spinal cord disability, Lee said in an email.

Lee’s design is called “Hoosier Culture,” a combination of a kid’s dress, dance outfit, thrift store fabric, an old T-shirt, and a costume. Halloween. Lee described it as a team support with an attitude while also shaping friendly practices.

The latest design called “Mate, can you spare a pen?” is from Cynthia Roberts, who is a retired UPS transporter who has attended the Trashion Refashion Runway Show since its launch in 2010. Roberts was inspired by the idea of ​​using non-sartorial items to make clothing, said Roberts in an email.

“The blouse is made from an old embroidered garment, an old t-shirt that had stains and other flaws before it was combined into a single top,” Roberts wrote in an email. “A braided rags hat adorned with dysfunctional papermate pen tops from this set.”

Jenett Tillotson, producer of the Trashion 2020 music video, said she supports the idea that clothes don’t belong in the trash.

“Trashion Refashion is all about highlighting how much trash we have as a society and we want to get people to think about it,” Tillotson said.

Celina Jaffe, a dancer with Trashion Music Video, said the process was very collaborative and different, especially during a pandemic.

“I felt like it went with the Trashion spirit of making things work and using what you have,” Jaffe said.

Janiece Jaffe, mother of Celina Jaffe and voice artist for the clip for Trashion, said she was willing to do anything to make the clip exist.

“It adds a marker and says we’re still here,” Jaffe said. “There is more than one way to keep an organization alive.