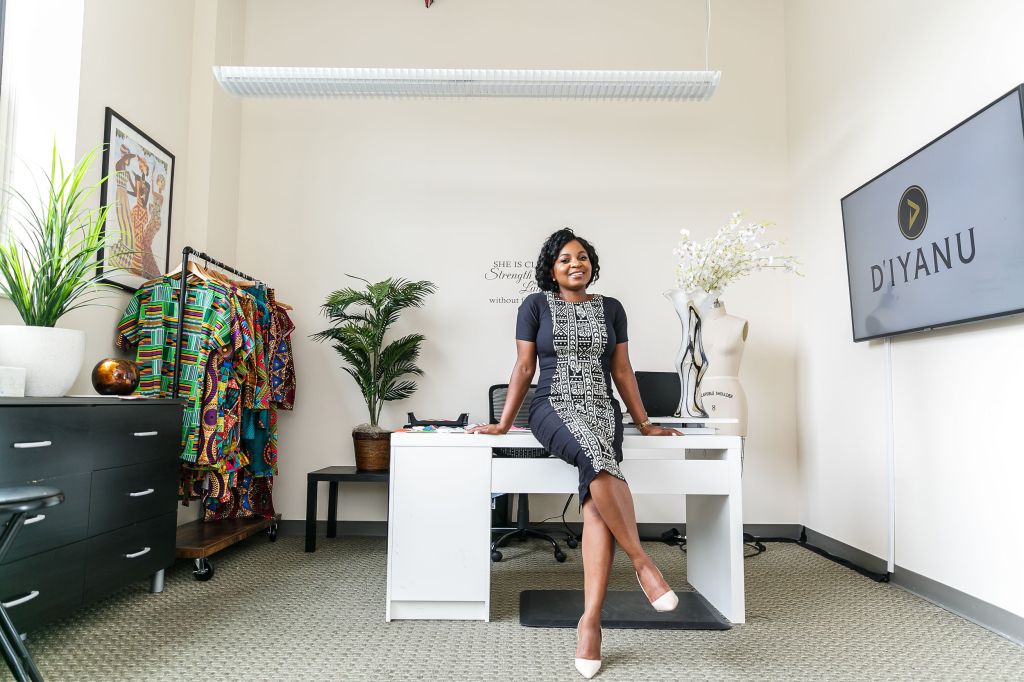 NORRISTOWN – In a warehouse on Main Street in Norristown, Addie Elabor, 35, is chasing her dreams by founding her clothing company, D’IYANU.

“It was a really cool experience. It was tough,” she said. “Looking back, I’ve done a lot. I had to wear many hats, but it was cool to be able to create something and see it start to grow.

Elabor and her family moved from Nigeria to the United States when she was 6 years old. She recalled “it was like a whole new world of people (and) food”. Leaving friends and family behind has been difficult for Elabor as she acclimatizes to the area.

“I was actually homesick for Nigeria when we moved here for the first two years, I would say,” she said.

Elabor’s family lived in several parts of the greater Philadelphia area, including the Overbook and Mt. Airy neighborhoods before moving to Elkins Park in Montgomery County.

After graduating from Faith Christian Academy, located in Sellersville, in 2004, Elabor pursued international business studies with a minor in French at Oral Roberts University in Tulsa, Okla. She then traveled to the south of France where she lived and worked as an au pair for a year.

But her path to fashion was not immediate. Upon her return to the United States, she found a job as an online merchandiser for a pet food company. She then worked as a buyer for a medical supply company.

But it was a conversation she remembers having with a friend that changed everything.

“After talking to a friend of mine, I realized there was an opportunity to provide an easily accessible modern African-inspired ready-to-wear line,” she said. “Normally in Africa it’s really easy to buy the fabric, find a tailor to have any style made, but in the United States it’s not really common practice, and obviously it’s a lot more expensive too. So I realized that people here would just like to wear modern pieces with these bold prints.

She described her concept as an “African-inspired version of an H&M or a Zara”.

She took a leap of faith and dedicated her time to her newfound passion for fashion by launching D’IYANU in 2014.

“I was more driven by my excitement than fear of what might go wrong,” Elabor said.

D’IYANU’s name comes from two languages: French and Yoruba, his “native Nigerian language”. Elabor said it translates to “from or from something wonderful”. Meaning is close to home for Elabor, as it is personal to her dreams. She pointed out that she was “taking something wonderful that you created and putting it out there.”

As founder and CEO, Elabor launched her line from her King of Prussia studio with six pieces for women: a blouse, two dresses and three skirts. She eventually quit her other job to make D’IYANU her main focus.

Elabor said she relies on trunk shows and sells her clothes at other events in Philadelphia and New York. She then grew her audience by marketing her clothes on social media and other digital platforms, including Amazon, eBay and Etsy.

“I just knew that online was where the biggest opportunities were,” she said.

As the business grew, it moved to office space in King of Prussia, then to Main Street in Norristown in 2016.

Realizing she needed more space, Elabor moved from IYANU across the street to 910 E. Main St., Suite 202, in Norristown. The clothing company now has 18 employees. His brother, Dara Ajayi, joined D’IYANU in 2016 where he is chairman and partner of the company.

As an online company, Elabor said its brand has gained worldwide recognition. While the majority of its customers reside in several major cities, including Brooklyn, Chicago, Houston, Los Angeles, and Philadelphia, there is also an international contingent of customers in Australia, Canada, France, and the United Kingdom.

The brand’s demographics break down into about 60% women and 40% men between the ages of 30 and 45, according to Elador, which added that there were “predominantly African-American shoppers,” as well as people from the Caribbean and others “from the diaspora”. from Africa who now live in the United States

D’IYANU presented a Black History Month 2022 online collection featuring clothing for men and women themed around “rich traditions”. Elabor said she “borrowed… iconic prints that represent African culture”, changing the “colours” and “structure to make it our own”. Elabor added that she was pleased with this year’s clothing selection.

Elabor said she loves how her clothes are “bold”, unique and “they give people this sense of empowerment that they can celebrate who they are”.

As for her personal style, Elabor described it as “casual chic” and added that “I always incorporate D’IYANU into what I wear.”

“I love being able to wear unique pieces, that people can’t find anywhere else because that’s how I was in high school…I loved finding different pieces, that no one else had , and I felt like I looked amazing in those rooms and stood out, and that kind of ties into what I do here at D’IYANU,” she said. Create pieces that stand out, that are unique and that you really won’t find anywhere else.”