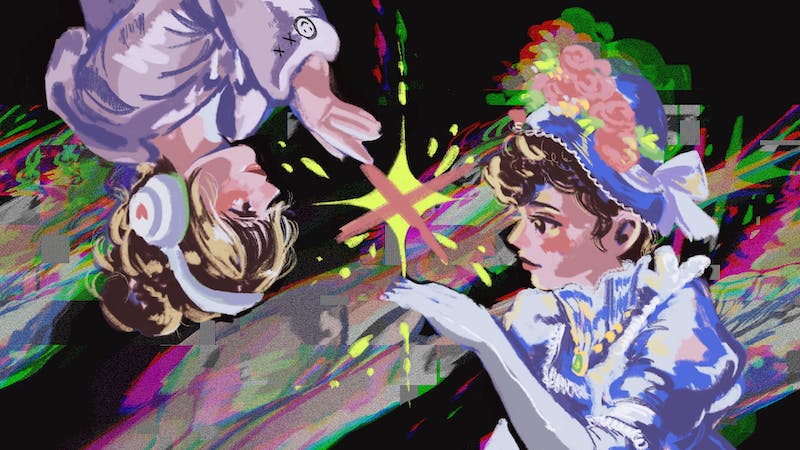 It’s a well-known truth that history tends to repeat itself, and in the dynamic world of fashion, trend cycles have proven this to be true.

Yet, deep in the recesses of design history lie some of the most eccentric and practical styles missing from modern wardrobes. From scented head cones to knee paintings, here are some of the most extraordinary fashion trends that should be brought back.

At first glance, the peculiar conical shapes at the top of Egyptian women’s heads appear to be some kind of hat, perhaps ritual or spiritual adornment. A deodorant may have been the last idea to come to mind, but these elongated cones were a surprisingly effective way for the ancient Egyptians to maintain a pleasant smell during long, sweltering days. The exact purpose of these accessories is still debated by historians. However, it can be concluded that the scented beeswax that made up the objects could have given off sweet smells of oils as it melted under the hot Saharan sun.

If you’re feeling daring, a wax cone could be a great way to liven up or freshen up your next Monday talk. The concept of incorporating scents is a practical and innovative style choice, but some aromatic earrings or vanilla-scented necklaces may be a better place to start.

While makeup can undeniably be a form of artistic expression, can you imagine it as a literal form of communication? Well, welcome to the secret language of moles, where every placement, size, and amount of moles can be used to scrutinize or celebrate you. This trend originated in the mid-1600s and gained popularity during the 18th and 19th centuries. These beauty marks, also called “flies” or “mouches” in French, could indicate economic or relationship status, appearing as hearts, birds, or the traditional shape of rounded freckles. If a woman was single, she could attend balls with a single heart on her left cheek. If she was lucky enough to find a suitor, she would move the heart to the right to show her unavailability.

On a more outrageous note, these marks were created to conceal the scars of smallpox and syphilis, much like a modern pimple patch. It also meant that moles could be associated with promiscuous behavior unless, of course, you were upper class – then that was elegant. Hulu’s Great uses beauty trends from the time of Catherine the Great by having eccentric noblewoman Aunt Elizabeth and Georgina adorn their cheeks with birds, stars and insects. In the 1700s, the more detailed your outfits, the more lavish you were – a standard that still applies to even the most delicate features of your face.

So if you look in the mirror and find that your outfit needs an extra touch, consider adding an elusive cutie mark, but not too much.

Have you ever gone about your business only to find that you accidentally left your scissors and needlework at home? Well, it might be time to bring out the forgotten accessory that is the chatelaine. The Chatelaine is an addition to your belt that holds holders for sewing kits, thimbles, writing utensils, and even a light dressing for the road.

For the modern 18th century woman, this meant you could have all the supplies needed for work or study at your fingertips, while accessorizing your waistline with gorgeous metallic etchings of stucco weaves, delicate flowers and ornaments. family crests. For the purposes of this millennium, chatelaines are the perfect way to add a detailed touch to your outfit while carrying school supplies. Forget being a catch-all girl – now chatelaine ladies can have their hands free while keeping necessities close at hand.

In 2019, Kim Kardashian released a divisive body makeup line KKW beauty brand. While the ethics of encouraging the concealment of any bodily ‘imperfection’ remains controversial, less than a century ago body makeup was used as a source of rebellion to highlight once understated features: outrageous knees. During the flapper era of the 1920s, shorter dresses emerged despite much disapproval, and knee lengths became a newly liberated aspect of the female body. To push the envelope, boyshorts threw off the stockings and powdered their knees red, a trend that would become known as “party kneecaps.” Knee rouging eventually evolved into knee painting as watercolor and oil painting elevated dull legs into canvases for young beauty artists.

Maybe you want to see a blank campaign every time you look down? Paint it on your knees. Fighting the urge to get that whimsical fairy tattoo you saw on Pinterest? Paint it on your knees. Want to declare your love to someone without flowers or cliché love notes? Paint their portrait on their knees for everyone to see. In fact, it can be used to declare all kinds of feelings, including disdain. In a 1925 feature film by American weekly, housewife Clarice Wilson has told the story of her husband’s hatred of his new dogs. In an artistic display of passive aggression, she painted her two canines on her knees, one for each leg.

Knee art could be used to express topics that are too difficult to put into words. Verbal breakups can be tricky – writing your two initials next to a scowling face on your legs can be a neat way to get the point across. It is not necessary to anonymously declare your hatred towards a class or a person on Parallel conversation—wear your hostility proudly on your body.

However, it should be noted to choose your knee battles carefully; a wrench was put in the Wilsons’ marriage when Mr. Wilson retaliated by painting two young women on his knees – you never know how far knee art can go.

By now, you’ve probably had that unfortunate moment when peaceful sleep is interrupted by the harsh abrasion of your own cough. To make matters worse, you have to attend an economics class surrounded by a few hundred sickly people. So instead of hacking half the freshman class, consider the sleek vintage look of plague masks. These raven-shaped masks might seem to come out of the crevices of your deepest nightmares, but their function couldn’t be healthier. Used during the bubonic plague cycle of the 1600s, they were a way for doctors to help patients without catching the disease themselves. Crafted with the finest leather and glass and decorated with the lovely smell of roses and spices, the N-95s could only dream of being so elegant. From one scourge to another, it seems natural to relaunch a trend that is both health and fashion.

As fast fashion dominates 21st century attire, the utility and sense of purpose that styles once had is quickly being lost in the endless cycle of micro-trends. Some of these trends from centuries ago certainly seem bizarre to a modern audience, but every accessory, piece of clothing, and beauty brand had a higher function or statement. Next time you’re rummaging through your wardrobe with nothing exciting to wear, consider digging up an archival trend.

2022-11-13
Previous Post: Rihanna is preparing a new line of children’s clothing
Next Post: The pre-loved fashion trends to look forward to this season