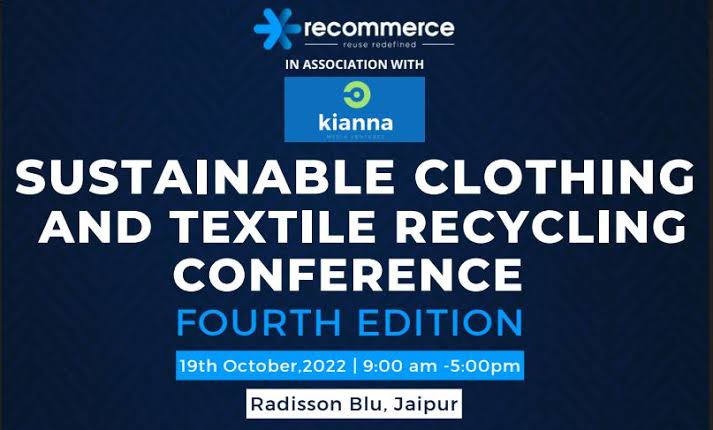 On Wednesday, October 19, the capital of Rajasthan, Jaipur, saw the successful culmination of the 4th edition of the Recommerce Sustainable Clothing and Textile Recycling conference. The event was held at the Radisson Blu Hotel with guest of honor Roop Rashi, Textile Commissioner of the Government of India, and began with the lighting of the lamp at 10 a.m.

The event kicked off with the first speaker, Dr. Vivek S Agrawal, President of ICWM, who addressed the topic “Standardization and Formulation of Textile Recycling Industries in India”. Dr Agrawal focused on the fact that nowadays everyone is focusing on plastic waste; but in reality, the emerging threat is textile waste, which does not concern us yet. He added that we should start paying attention to factors such as the speed of the consumer era and the emergence of fast fashion. It was mentioned that although we have a number of rules for solid waste and plastic waste, no such rules or standards have been established so far for the management of textile waste, which should mainly be focus on the three Rs of sustainability – Reduce, Reuse and Recycle. .

“Textile not only consumes water, but it also degrades our soil; for example, in the cultivation of cotton, the use of pesticides is maximum,” he mentioned. Projecting how the threat may increase further, he revealed that approximately 56 million tons of clothing is purchased globally each year, and that is expected to rise to 93 million tons by 2030 and 160 million tons by 2030. 2050.

Returning to the use of water in the textile industry, the ICWM President added that it takes a lot of water to produce textiles, more land to grow cotton and other fibers, and the global textile and clothing industry is estimated to have used 79 billion cubic meters of water in 2015, while the needs of the whole EU economy amounted to 1123 billion meters cubes in 2018. It was also mentioned how to make a single cotton t-shirt, 2700 liters of fresh water are needed according to estimates, this is enough to meet a person’s alcohol needs for 2.5 years.

“The use of non-renewable raw materials in the textile and clothing sector will reach 300 million tons and the amount of microplastics released into the oceans will reach 22 million by 2050,” said Dr Agrawal.

At the end of his presentation, it was concluded that the potential solutions to the negative impact of textile production and waste can primarily be the three Rs, and that both consumer-based and industry-based solutions are needed. to bring about a change. Spreading the right amount of awareness is another solution to stem the problem, along with promoting sustainable fabrics like khadi. The government must also strengthen its role by taking measures to promote sustainable development and the introduction of environmentally friendly production standards.

The next speaker was Harshit Kakkar, General Manager of HSN Machinery, which focuses on fiber and yarn processing, providing recycling solutions to turn textile waste from fabric to fiber. Kakkar’s talk mainly revolved around textile recycling machines. He said that textiles should be recycled to reduce the carbon footprint, to save our future, to reduce the consumption of raw materials and the creation of waste.

“We need to change our mindset to achieve a sustainable future,” Kakkar said.

Next in line was Gaurav Sharma, CEO and Head of Happiness, as he calls himself, of Thankyou, and addressed the topic of a business case for circular textiles and accelerating post-consumer textile recycling. Sharma, for his work in the field of sustainable waste management, is recognized as the Trashman of Rajasthan.

The fourth speaker at the event was Abhishek S Kamble, Director of GSCS International India Limited, and focused, along with textile recycling, on its certification, which the company mainly deals with.

The conference also saw two panel discussions take place. While the first focused on the topic of manufacturers’ proactive approach towards textile recycling and different sustainability strategies for the efficient use of textile waste, and was moderated by Siddharth Lulla, the panelists were Dr. Vijay Singhal, Pritam Singh Sachdeva and Greenwaves CEO Anil Chaudhary; the second discussion took place on the topic – why is upcycling the biggest trend in fashion right now and what are the technical and financial challenges associated with it.

Keynote guest Roop Rashi, speaking on the role government plays in the sustainable management of textile waste and production, said it’s not that central and state governments don’t care about sustainability, and that they take measures to facilitate the necessary support for the same; but she added that applying for grants is impractical to do in the matter.

“The textile industry is the second largest industry for employment, and the government is supporting the scaling up of it by providing means of natural transformation through the Samarth scheme,” the commissioner said at the time. textile.

Another crucial topic related to textile sustainability was discussed by Bharti Singh Chauhan, Founder and President of PraveenLata Sansthan, which was “Time of Poverty”, and focused on saving our environment from plastic waste through durable fabric pads.

Chauhan said, “Using a cloth during menstruation rather than disposable plastic pads to reduce and create a healthier environment is the need of the hour.” She added that it is not the use of cloth per se but the unhygienic practices associated with it that have become the problem. It has been revealed that only 36% of women in India have access to plastic sanitary napkins while the majority of the remaining 64% still use a cloth during their periods and this is an ancient practice that can be followed, along with hygienic practices, to reduce the otherwise 113,000 tons of menstrual waste fill Indian landfills every year.

With the insightful discussions dealing with the sustainable management of textile waste throughout the event, it became certain that such conferences should take place at regular intervals as they are not only good for raising awareness, but also for people and like-minded speakers come together and make a change, leading to a better world and a cleaner environment.