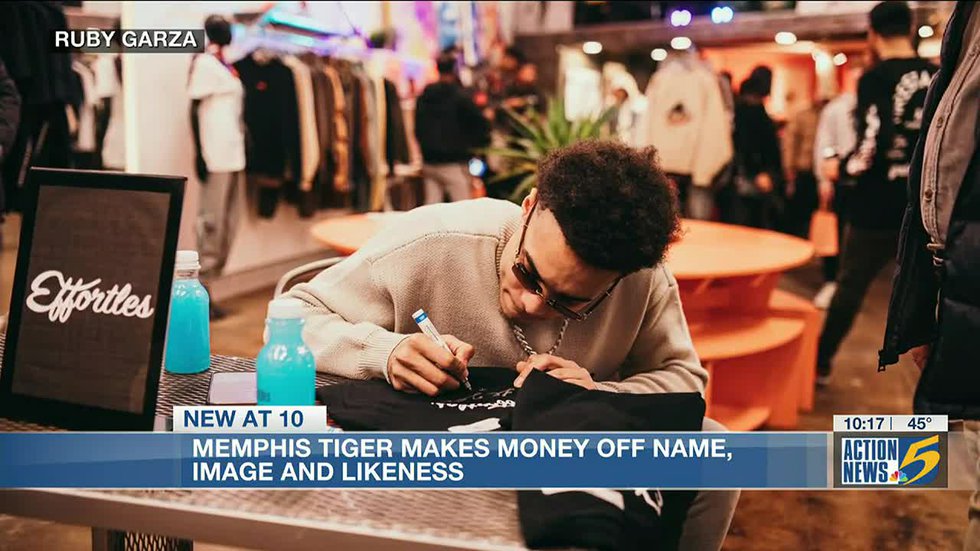 MEMPHIS, Tenn. (WMC) – Memphis fans know Lester Quinones as the Tigers’ best defensive player and the guy who wears the short shorts and strums the guitar every time he hits a three. However, with the new name, image, and likeness, they can see another side.

“They get to know me through fashion and not just seeing me still in uniform or playing sports, kind of seeing me a little bit myself,” Quinones said.

Quinones has always loved shoes and clothes. With NIL, he turned his interest to his Effortles brand.

“I felt like it was somewhere we could have started where it’s something simple, nothing too crazy at first. As we go along we start doing more things said Quionones.

Quinones works with Memphian Aahil Shermohammed. The Germantown High School graduate is one of the youngest licensed NBA agents in the nation. He also connects Tigers with NIL deals.

“Whether it’s with clothing brands like InHouse or local jewelers. It just broadens their opportunities, broadens their horizons, also provides them with business experience,” Shermohammed explained.

Black t-shirts with ‘Effortles’ in white writing flew off shelves and online. Fans bought over 100 in a matter of hours from a recent pop-up shop at Odds Atelier on South Main.

“The supporting cast that I have here, especially in Memphis, just hoop and be on the team, there were a lot of people that far from the basketball fanbase, their kids, and like I said before seeing people of all ages wanting to wear my stuff and support me, it was a great little event,” Quinones added.

According to Shermohommed, Quinones promotes its own brand, which has allowed it to make a profit.

“The money is there for a lot of guys when it wasn’t there before,” he said. “We’re not talking about life changing, but we’re talking like, even when I was in college, $500 was enough for a kid in college and a lot of these guys get similar amounts. Many do a lot more and some don’t do anything, so it kind of depends on the player and the deal and how much they’re into it.

Quinones remarked that Memphis was supportive of his brand, “Places I go to eat and stuff, I see people there, wearing shirts and they always just want a picture and stuff,” he said. “It’s just a great feeling to know that I have the supporting cast that I do here.”

While he’s down to just one t-shirt now, Quinones plans to drop more items as Effortles continues to grow.

Click here to point out a spelling or grammatical error. Please include the title.