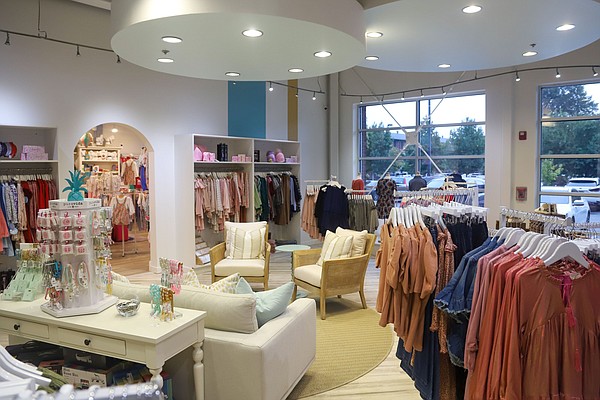 A longtime children’s clothing store on Chattanooga’s North Shore has expanded as it seeks to fill a niche for teens, its owners said.

“We listened to the customer and the need for a store like this,” said Kelly Paschall, who along with co-owner Bonnie Moses has expanded into a space adjacent to The Sandbox that they call the Shore Next. Door.

Located in the 2 North Shore complex on Manufacturers Road, the owners of the store said in an interview that they have added 1,600 square feet of space to the 2,600 square feet they already occupy as they sell baby clothes at teenagers.

“We thought about the teen market. We’re making it a bit trendier” than the existing Sandbox, Paschall said, adding that the space, aimed at girls and boys, was designed by Chattanooga’s Henson-Hinck.

While The Sandbox has been around for three decades, Moses and Paschall bought the business last year. Moses said she had been the store manager for nine years before the two friends who had met at Covenant College decided to buy the retail business with their husbands.

Moses, from Greenville, South Carolina, said she was a business administration student at Lookout Mountain College. Paschall, from Charlotte, North Carolina, said he studied psychology. She was working at the front desk of a primary school when Moses broached the idea of ​​them and their husbands going into business.

“It wasn’t on my radar,” Paschall said. “It’s been a very different work experience.”

Moses joked that running the shop is “more than just cashing checks.” She said the new footprint gives what “customers have been asking for and a space that belongs to them.”

Business owners said they like their location at 2 North Shore, citing the variety of retailers and other businesses that operate in the sprawling center.

“A huge draw is Whole Foods,” Moses said, adding that “there’s always something going on at (nearby) Coolidge Park.”

Paschall said that in addition to local shoppers, The Sandbox receives a lot of tourist traffic.

Businesswomen said sales so far in 2022 were up about 8% from a year earlier. But the new space is expected to drive growth of 20-25%, they said. Annual revenues are just over $1 million, according to the owners.

They said they’ve added about four or five new part-timers to the staff, which now numbers around 20 with the expansion.

Manufacturers Road is undergoing rapid change with hundreds of new apartments as well as retail space proposed for the North Shore thoroughfare.