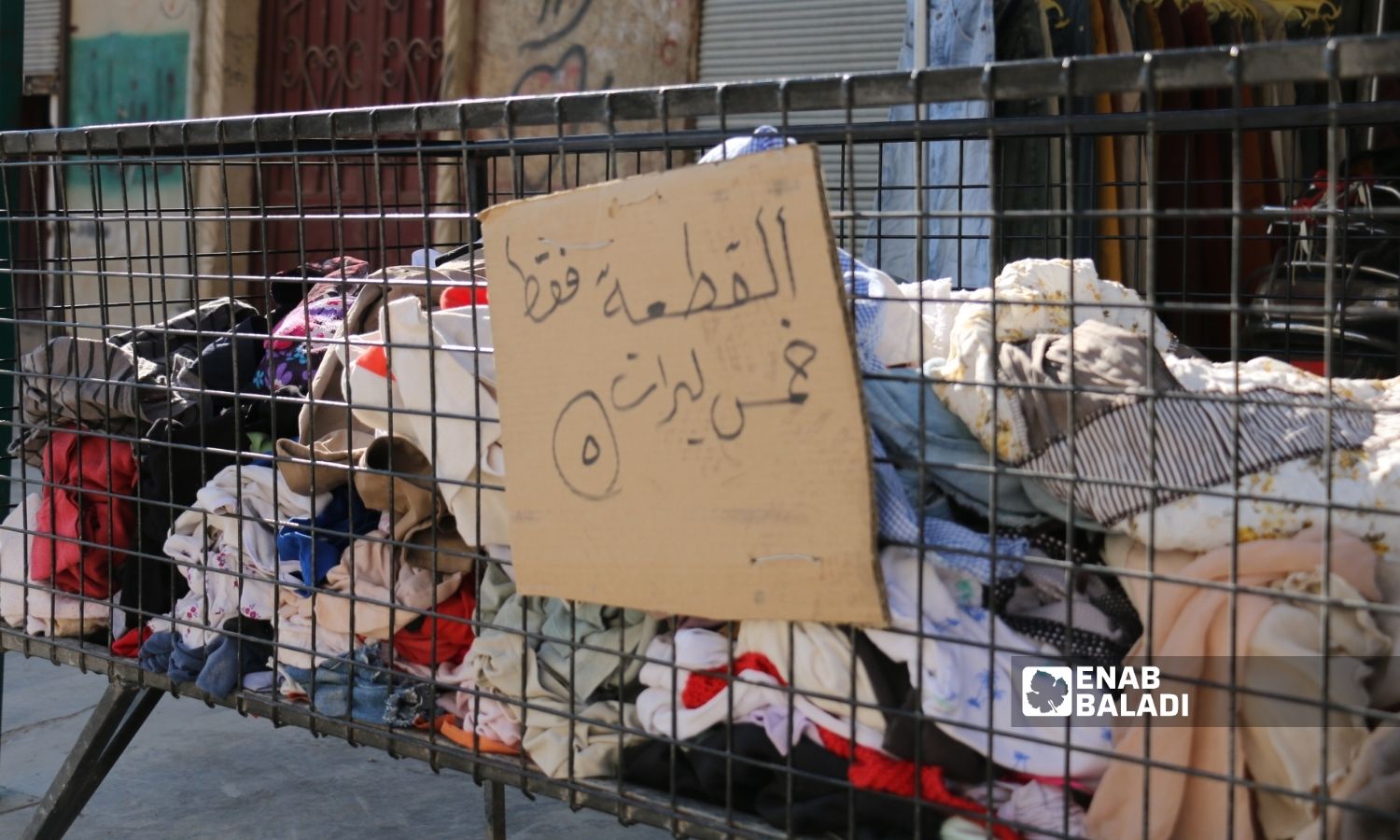 Ahead of the winter season, Tuqa al-Saeed, 38, visits the second-hand clothing store in the border town of Azaz, in the countryside north of Aleppo, in search of clothes and shoes that will warm her children .

Al-Saeed relies on the financial earnings from his work on the sewing machine to pay the rent for his house, provide for the basic needs of his children and compensate for the absence of their father, who forcibly disappeared decades ago. years, according to what she said Enab Baladi.

Many of them resort to buying second-hand clothes and shoes given the discrepancy between the monthly income of people in northwestern Syria and the cost of living.

A refuge for the people

“For the price of one piece from new clothes shops, I buy three pieces from second-hand clothes and stores,” Tuqa says, adding that she previously had to borrow to buy clothes for herself and her children. .

The quality of used clothes is no different from that of new clothes, while the price difference has a significant impact on the lives of low-income people, according to Tuqa.

Mohammad Malish, 30, who was displaced from Maarat al-Numan, agrees with Tuqa, who said prices for new clothes are about three times higher than prices for second-hand clothes.

The arrival of winter coincides with the return of schools, which increases the financial burden on parents and increases children’s need for clothes that are supplied by second-hand clothing markets at an acceptable price, according to Hamza.

Second-hand clothing merchants import their goods from Turkey, which are sold to traders after being divided into categories according to their quality and mode of purchase.

The price of the second type of used clothes is fixed according to their weight since traders buy them in sealed bags without knowing what they contain. Shop owners sell the damaged ones for uses other than wearing them, said Hamza, who prefers to buy the second type. Enab Baladi.

For his part, Mohammad Malish, based in Azaz, said he relies on buying damaged second-hand clothes to light him up and warm his children with when he is unable to secure the means of heater.

Locals’ reliance on second-hand clothes is an attempt to preserve the minimum necessities of life given their inability to meet their basic needs due to the high prices of goods affected by the depreciation of the Turkish Lira.

According to a report by the United Nations Office for the Coordination of Humanitarian Affairs (OCHA) published last April, a fifth of the displaced people in northern Aleppo and around 28% in the Idlib region live in critical condition below of the minimum expenditure basket to survive.

OCHA added that more than 75% of residents and internally displaced people are food insecure in northwestern Syria.