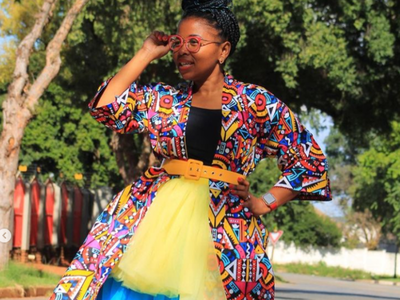 She quit her 9 to 5 to start her dream clothing business!

Definitely one for those of you sitting on the fence…

Very rarely will you find someone who is willing to give up their security to pursue their dream.

It comes with that feeling of fear that’s been ingrained in us from a very young age. The fear that comes with parents wanting the best life for their children. A fear that sometimes confines rather than embraces talent.

Our Woman Crush this Wednesday is dedicated to Inga, the owner and founder of Stitched By Inga.

“Sebata, who officially started her business in 2019, says she first started making clothes as a hobby.” (IOL)

She shared that it was something she wanted to do outside of being a wife and mother. But quitting her full-time job to pursue her hobby has become “a bold and proud move” for her.

“Sebata says her clothing business is different from others because of the home consultations she does for clients who can’t come to see her.” (IOL)

The idea for her business is strongly linked to her love for “fashion, class, timeless pieces, accessibility and affordability”. (IOL)

In three years, her business grew and she witnessed the success of her turnover, which tripled over the years. She started with one machine, but now has five.

Read more: #WCW: ‘How Does She Do It?’ author Cindy Norcott advocates balance

“She has also built a home studio, but her goal is to have a physical store in Johannesburg. She also hopes to partner with other retailers to list her clothing line in their stores, as well as to have her brand. known both nationally and internationally.” (IOL)

Stitched by Inga has had great success during the pandemic. Inga said she has seen an increase in people wanting to buy local so small businesses don’t have to close.

She’s definitely an inspirational woman doing it, but remember, it doesn’t come without hard work.

Check out the post below, featuring Zoleka Mandela wearing one of her designs:

2022-05-04
Previous Post: All the biggest fashion trends that dominated the red carpet at the 2022 Met Gala
Next Post: 7 must-have fashion trends for summer 22 – Flux Magazine